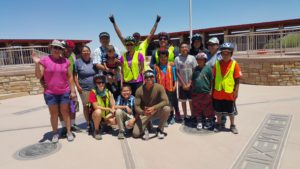 Summertime cycling on “the tour” usually makes people think of France, as in Tour de France. On the Nation Nation, since at least 1991 “the tour” more often has referred to the Tour de Rez, the annual bike journey around Dine’ Bikeyah. Like its counterpart in France, the Tour de Rez involves bikes, hundreds of miles on the trail and endless days of cycling.  Unlike the French ride, the Dine’ tour is fueled by mutton, on dirt roads and trails, with most nights under the stars. Showers and restrooms are a luxury that TDR riders trade for magical landscapes and the awesome camaraderie of the ride.

The concept of the Tour de Rez originated in Shonto in 1991 and has been a summertime rez tradition each year since that time.  A small, hearty group of mostly young riders from across the Navajo Nation take part in the Tour, riding and exploring remote sections of Dine’ Bikeyah, while experiencing Dine’ landscapes, history and culture from the saddle of a bike.  Areas such as the Chuska Mountains, No Man’s Land (Navajo Mountain-Monument Valley), LCR Gorge/Grand Canyon, Black Mesa and southern Utah are among the favorite regions of the Nation.
The Tour is typically 7-10 days in length and riders may opt to ride the entire length of the ride, or do a couple or several days.  Some students are affiliated with school groups, while others are independent.
TDR receives support from Teec Nos Pos Trading Post, Navajo United Way, Navajo Parks & Recreation, the Navajo Rangers, Shonto Prep School and NTEC/Bisti Fuels, along with schools, chapters, churches and volunteers from around the rez.
You can contact Tom at (928) 429-0345 or at chuskaman@yahoo.com for more information about Tour de Rez.  See you on the trail.