NavajoYES believes that trails are a major element of the wellness revolution and we strive to promote trails in communities and tribal parks around the Navajo Nation. Trails are a key element in the promotion of a healthy lifestyle, community wellness, ecotourism and family togetherness.

NavajoYES has been involved with trail restoration and promotion since the 1990’s, including years of work by our youth crews on the Rainbow Trail to Rainbow Bridge near Navajo Mountain, Arizona/Utah. These trail teams have done ongoing maintenance, restoration work and trash abatement on this stunning route. Beginning in the 2000’s, NavajoYES became the caretaker of the very popular Twin Falls Trail near T’iis Nazbas, Arizona, and have hosted numerous trail work weekends to Twin Falls.

We were excited to spearhead the development of the Navajo Trail Task Force in 2015. With support from the Division of Natural Resources, Navajo Parks & Recreation, Office of Navajo President and Vice President, Engineers Without Borders, IMBA, Ancestral Lands and Southwest Trail Solutions, grassroots efforts have flourished throughout Dine’ Bikeyah. The Task Force is a core group of dedicated trail advocates which meets bi-monthly in communities around the Nation. The mission of the Task Force is to work with local communities on their projects and assist them in meeting their challenges. Since 2016, we have also hosted the annual Navajo Nation Trails Conference in February.

The initiative has led to a plethora of trail projects across the Navajo Nation, including the following major new and restored trails: 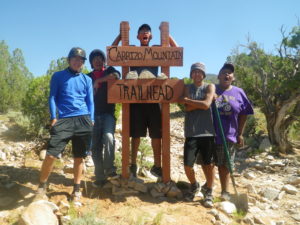